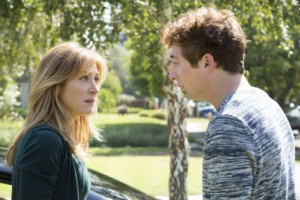 On Shameless Season 5 Episode 9, Alexander plays Helene, a character who crosses paths with Lip Gallagher in the college classroom … but things quickly escalate from there.

And, as Alexander told me when we talked about her new gig recently, Helene is someone who carries her sexuality very different;y from the star’s’ other alter ego.

Alexander also talked about what Helene sees in Lip, whether doing nudity for the Shameless role was a big deal and how Rizzoli’s Maura needs to get her groove back.

TV Fanatic: Helene is kind of sexy and she really wears her sexuality. So tell me how you connected with this character who is definitely very different from Maura.

Sasha Alexander: Totally different than Maura, oh my God. It was like, I finished Rizzoli & Isles on a Friday and I started Shameless on a Monday and I needed to take a lot of quiet, meditative time to sort of enter the world of Shameless and the character.

Look, it’s always a gas to be able to play a role different than the one you’re playing at the moment. So that is what every actor looks for, but when they called me to consider doing this part, it was just a yes for me and the whole experience was a gas.

Getting into the role of Helene was asking a lot of questions to the show runner, Nancy Pimental and her directing producer Chris Chulack, who directed the first episode that you meet Helene and I really wanted to understand who she was wholly. You’re going to see a lot of different things in the four episodes. She’s extremely, let’s say, a progressive woman. She is very comfortable in her body, in her choices, but it’s complicated.

[Helene and Lip] definitely have a huge sexual chemistry, an attraction, but that’s not what it ultimately is…it gets deeper and more complicated on both sides for both of them and that’s what’s really interesting.

TVF: What do you think she sees in Lip? Is it just a sexual conquest, or does she see something more in this kid? It gets hot and heavy right from the start!

SA: I think it’s Shameless so it moves pretty fast. From Day 1, it moved pretty fast. I think that initially, he’s attractive and he’s special in a unique way…he’s smart. He’s quick. He banters well with her. He’s not laying down when she’s not allowing him to get into her class and when he comes to her office, it turns into something very different.

My question was, obviously, who is this woman that she would wreck her position for this kid? What does she see in him? She couldn’t just do it for the sex because that seemed so, I don’t know, trite in a way. So obviously, she sees something more in him, she feels something more in him and she’s right because as it develops I think you will see she did. She got it. She smelled in him something and she was right.

I don’t want to give it away but let’s just say that she plays different roles in his life through their experience. I think that is very interesting for his character. It’s always difficult to enter the roles of another series in its fifth year like jumping on a moving train but it’s also exciting because as a guest star, you can’t really bring another color to the main character and I think and I hope that that’s what it does for Lip.

We’ve seen him in so many situations that he is in control of because he is so bright. I think now, he’s facing identity crisis. He’s a college kid that’s going to get his act together or live the life he was brought up in. I think that Helene offers him a window into another world and she helps nurture that part of him.

TVF: It sounds like Helene will be teaching Lip certain things whether it’s about the world, or whatever, do you think she’ll also learn something from him?

SA: Do I see that she’s going to get more than she bargained for? Yes, I do. I think both of them get surprised, which is ultimately what I like so much. I’ve always been attractive to this idea that age is only a number and it is not really where people might be at, not just physically but emotionally what they might be needing.

At this moment, it’s interesting because whatever Helene is going through personally that attracted her to this much younger man, he’s also incredibly attracted to her in a way that’s totally different than any of the girls that he so easily can get and so there’s a need there and that need is the most interesting thing to me.  Humanly speaking, what is that brings people together?

Yes, I do think that they become more for each other than you think. It’s definitely not every episode is just them in bed. He brings some of his own problems to her doorstep, which I don’t know how happy she is about that. In typical Shameless fashion, there’s so many levels to it that are unexpected and kind of twisty turny and are so interesting that, that’s the most fun for me. I like it that that way.

TVF: What would Maura think of Helene if they were to cross paths? Would she even give her a second glance, or would she just write her off, what do you think she would think of her?

SA: That’s a great question. I think Maura would love Helene. I actually think she would even be a little bit like her. I think that Maura has been kind of trapped. If you look at the early seasons of Rizzoli & Isles, Maura was an extremely sexual being. She was always the one pushing Jane to date different kinds of men. She was the one much more involved in her romantic life and that sort of withered away a few seasons ago and now, I feel like the women are just so lonely. So I think Helene would be an inspiration to her, really channeling her inner Goddess Helene is a very real live woman. I feel like she’s really like ahead of the game in a big way and that’s always very interesting to play.

TVF: Just because Shameless is also a much more adult show and you have some very adult scenes where nudity involved, was that a big step for you, or was it not a big deal because the role almost required it?

SA: It did require it and it was definitely something that is a part of it when you go and do a show like Shameless, that’s where you’re going to go and I did exactly what I wanted to do. There was something else that was attractive. I wanted it to be something totally out of the box and that’s what I liked about it. There’s much more to the character than just that part of her, her body or her sexuality. I think definitely they have a huge chemistry there, but I think there’s more to it.

I think if it was just one-sided, I probably wouldn’t have been attracted to [the role], but do I think that people who have never seen Shameless will be a little shocked if they just tune in? Yes, I do. But if you’ve seen the show and you follow the show, I don’t think you’ll be shocked at all. I think you’ll be totally, hopefully, excited about the storyline.

For me, sexuality is to me is just human nature and it’s very natural and I don’t find anything offensive about it but I do about violence against women. So I think this is really personal and some people, it might appeal to some and not to others. That’s just what it is, it’s a role.

It was such a joy to work with that whole cast and Jeremy White is extremely talented and they’re just wonderful. It’s extremely liberating to be on something where you’re not the same thing every week. You get a script and you don’t know where it’s going to go. That’s the big, unique experience because it’s like, how wild can you get? So for me, that was just really liberating and really fun to do. I had a blast.