“What was most interesting was that she’s this woman who’s in full control of her body and her mind, and she knows what she wants,” Alexander said of her ‘Shameless’ role. 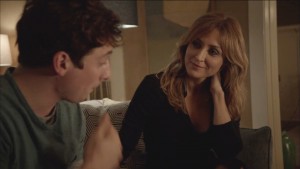 For four and a half seasons of Showtime’s dysfunctional family dramedy Shameless, a good contingent of the audience was just waiting maybe not-so-patiently for Lip Gallagher (Jeremy Allen White) and Mandy Milkovich (Emma Greenwell) to figure things out and actually make a go of a relationship — even if not a traditional one by usual television standards. That seemed harder when Lip started dating rich girl Amanda (Nichole Bloom), and it got even more complicated when Mandy moved out of Chicago with her abusive boyfriend. But the entrance of Helene (Sasha Alexander), Lip’s professor-turned-lover may just be the biggest complication of them all.

Amanda may have been Lip’s gateway drug into a new world — one of finer things — but Helene is challenging him and inspiring him to be a better man.

“[Helene] is somebody that he can trust and as somebody that I think is overall looking at him and saying, ‘You can be more than you were raised in.’ And for Lip, he’s stuck between the people and the society that he was raised in and now being at a university with new options, and she’s saying, ‘Behave like the kid at that university,’ ” Alexander told The Hollywood Reporter of her guest starring role on Shameless.

With only her introductory episode already aired, Alexander talked with THR about what to expect from Helene and just why now was the perfect time for her to take an edgier role.

Let’s start at the beginning with Helene: were you actively looking for a role so different from Dr. Maura Isles on Rizzoli & Isles, and what was it about Helene that made you say, “That’s the one!” if so?

The wonderful thing about television is that you do get to play the same part for a long time, but then the other part to that is people do see you as only this one thing, and I really want to play all kinds of characters. And it felt like the only way to do that was to get yourself around a role that is a completely different side of you. The producers came to me with the role, and their concerns were that there was nudity involved, and they wanted to know whether or not I would even consider it, and I said, “Well yeah, but it depends, obviously, on what it is.” So I had a lengthy conversation with Nancy Pimental and Chris Chulack and Andrew Stearn about the details of this woman — who she is and what role she plays in the story and then in Lip’s life, really, along his journey. I think all we want to do [as actors] is take roles that are something different from what we’ve played, and Helene couldn’t be further from Dr. Maura Isles. (Laughs.) So after six years on that show, it was very exciting to me. I was looking for something different, and Shameless came up, and it was perfect timing.

What do you think Helene saw in Lip that inspired the progression of their relationship to move as fast as it did?

One of the things that did concern me, and which I kept going back to, was “Would she really do this and risk her tenure by getting involved with [a student]?” That said, Lip is special. He’s really smart and not just in class. I think that when he shows up to her office and how he is with her, I think she’s attracted to him; I think it’s sexy and hot and all of that, but then she starts to really see that he is a really special kid in terms of where he came from and who he is. So I came from a point of “This isn’t just about sex.” She’s a progressive woman, so “What is it that moves her? What is is that she sees? What’s happening inside?” She takes an interest in him that goes beyond what she expected. Not every episode is them in bed! (Laughs.)

If she’s advising him or just listening as he confides in her, that almost sounds maternal.

Yes, I think she definitely is, and you’re going to see that in the next episode. I don’t think she takes a maternal “I’m going to take care of you” [approach but] a little bit more of “I’m older; I’m wiser; I know what I’m talking about; and you need to get your shit together,” basically. You see how young he is in some of the choices he’s going to make with her, and he tells her some of the stuff that’s going on in his life that puts her in the middle of situations she doesn’t necessarily want to be a part of, but what I like about it is that I’ve always believed that relationships are not about the age between people but who are they? What are they looking for, and what’s the connection — whether it’s sex or some kind of emotional connection, that’s what makes it appealing to me. But it’s complicated! You’ll see she’s kind of like the girlfriend and the mother. Jeremy said that; we were shooting a scene that was basically like the morning after, and he said, “This is so weird. It’s like being with my girlfriend and then having to talk to her mom the next day.” (Laughs.) There is this kind of odd thing about it, but that’s what I love about the show. It’s pushing the envelope. It’s so great to read a script and go, “They’re never going to do that.” And then they do!

How do you view Helene and all of her complications?

She’s a very progressive woman and she definitely has certain tastes. Some of them will be rather unusual and funny. But for me, I think what was most interesting was that she’s this woman who’s in full control of her body and her mind, and she knows what she wants. It was interesting to play somebody really that mature because even on Rizzoli & Isles, not to compare it, our characters stay kind of youthful; they’re not married, and they don’t have kids. Helene is a very realized, mature woman — regardless of what you think of her choices, she’s very much in control of them. And I think it will be interesting to see Lip with that kind of a woman because he’s always the one in control. He’s going to become something in her life, too; he may be more than she bargained for.

Will Helene meet the rest of the Gallaghers and get involved in those aspects of Lip’s life?

She gets to know more about him, but the situations are not about his family but other friends and things to do with Kev [Steve Howey] and some of the dealings they’re doing on campus. She’s kind of getting involved in that part. But she’s also bringing him into her fold, which is interesting because we’ll start to see Lip in some more posh situations. Can he be influenced in different ways? Can he pull himself out?

You mentioned that the producers came to you with concerns you might not want to do the role because of the nudity involved. Were there things you said no to, or things that were changed based on conversations about just how much you were comfortable with?

I never thought as an actor that I would not do nudity, I just never thought I would do it after having two kids and with this very young man! So that was it’s own thing. (Laughs.) But that being said, I think part of it is so liberating because you kind of have to just go with it, and that’s the tone. There were conversations about sexual positions or whatever that I might not be comfortable doing, but as far as when we were shooting, not really; everything they wrote was pretty much what they had said, and I think then the question becomes how they’re actually filming your body. I worked with the Wells team before, and they’re classy people. The concern is that we live in an age of the internet, and anything you do is forever out there, and I have to always feel comfortable that when my child comes to me at some point and says, “Why did you do this?” I know why I did it. Those reasons are very clear to me, and I’m very comfortable with this job. I think those are the things you have to consider these days. It used to not be like that. But the other thing, too, is it’s not gratuitous. Sexuality doesn’t bother me as much as violence does; sexuality and the human body, I feel is like, “Go for it.” And I do feel that for the character, when you see her episodes this season, you’ll say, “I think the nudity that was there was meant to be there.” It wasn’t all that she was about.

Helene is sticking around through the end of season five, but is this a role you have had conversations about continuing in the already announced season six?

I would love to do more if the situation presents itself! I think it’s fun for people to see actors play different parts. Whether you agree with it or not is not the point, it’s more about “Can they pull it off?” It’s really fun to be able to — as an actor — be able to go into a series that’s been on for five years and jump into their world and play with them for awhile. Especially such a specific world! Shameless is a very different show; it’s an envelope-pushing show, and I had a lot of fun with it. There’s nudity; there’s cussing; it’s wild; [you need to] watch it with a sense of humor and an openness to go on for the ride.

Shameless airs on Showtime on Sundays at 9 p.m. What do you think of Helene so far? Sound off in the comments below.