Going Once, Going Twice is a fun episode and ultimately it’s ending plays a big part in the show moving forward.
Coincidently, the fire fighter who saved Ian happens to be gay but there is more to him. From what I’ve seen, he’s a great guy. The entire fire fighting crew are very friendly and approachable, most specifically a faction within the fire fighters. There is a certain scene with said firefighters that does peak Ian’s interest, sexually (it’s filmed in a sexualized but entertaining manner).

The house debacle continues into this episode. Fiona ventures to the bank with Sean to see what she can do to save her home and is surprised by the outcome. 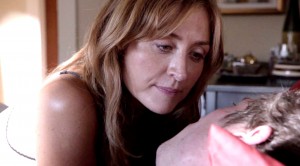 Sasha Alexander’s character, Helene gets a lot more screen time, we get to see more of her with Lip, but also we see her as a working woman who might struggle when she’s questioned. She might not always have the answers. Sasha Alexander has a particular scene where she does an really subtle job reacting to this issue. The camera work during this scene is really good and made me empathize with her so much more.
We’ve always seen Helene in such a happy and cheerful light, she’s such a joyful spirit but this episode shines a new light on her. Theres a truly beautiful moment between Helene and Lip during the episode. Sasha Alexander shines there, it’s so intimate and genuine. Jeremy Allen White and Sasha Alexander have really strong chemistry but this is different, it’s not sexual but ordinarily honest in the most mundane of places. Her words to Lip are so thoughtful with a lot of goodness embedded in it.

Carl continues to be infatuated with Dominque, his dream sequences involving her are incredibly fun. Ethan Cutkosky is having such a blast with this new take on Carl, it’s totally obvious. Carl’s Prison Inmate/Roommate gets some much need backstory, we finally get to learn a bit more about him.

Frank continues to be Frank, in the worst way possible. Will Debbie fall prey to his tactics?

A big secret about Sean comes out during the episode. The way the camera focuses on Dermot Mulroney in the midground and at Emmy Rossum’s face and hands in the foreground is perfect, a really interesting and fresh way of showing her responsiveness without needing to rely on facial expressions only. Emmy is just brilliant in this scene, her reactions are always poignant and authentic. A scene prior to this, features glances between Sean and Fiona, the echoing silence is awkward and quite heartbreaking. Emmy shines in this shot, she conveys a plethora of emotions so effortlessly.

V and Fiona share some great scenes. V and Fiona have such an amazing, through thick-and-thin, honest to god friendship and we get some much needed scenes between them which I’ve missed.

I really admire Debbie’s tenacity, regardless of her choice to keep the baby, she’s really trying to prove herself and that’s commendable. One line Emma Kenney utters to Frank is quite awesome and is a powerful statement. I’m really liking how determined Emma Kenney is.

Things are changing for the Alibi. Svetlana truly is the smartest one there and she’s really leading the way. Isidora Goreshter, in her few short scenes, always leaves her mark, she’s a force to be reckoned with and it definitely shows, V might just learn a thing or two.

The episode ends on a cliffhanger, the reaction of a certain charter is absolutely mine. It really makes you want to watch the next episode. Shameless airs Sundays at 9 on Showtime.