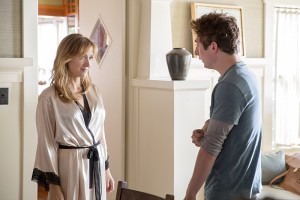 Sasha Alexander, a mainstay of TNT’s Rizzoli & Isles, has temporarily tossed aside Dr. Isles’ lab coat to pursue the role of Helene Runyon in Shameless. As the boundary-pushing Runyon, Alexander embraces nudity, an older woman/ younger man relationship and an open marriage. Of the role she says, “I really wanted to do something that was a complete departure for me.”

Had you always been a fan of Shameless?

Yes, from the beginning, so it was exciting when they called me to be a part of it. I felt so honored. I love the show. I think it’s so much fun and so wild that it was exactly what I wanted to do.

It’s quite a departure from Dr. Maura Isles in Rizzoli & Isles.

Yes. When this came up I wanted to understand the character further, so I got on the phone with the producers of the show and we spoke about the character and who she was. They were concerned initially that I wouldn’t do the nudity and when I said I would, it became a deeper conversation about this woman. She fascinated me, and I liked that you didn’t know she was in an open marriage. It was edgy, it was sexy and different in the sense that, you know, not to say that Dr. Isles isn’t an adult, but I felt like we were reaching into kind of deeper waters here, in terms of adult territory, and what we were playing with. It was more provocative and it was a risk, it was scary.

How did you prepare yourself for those nude scenes, having not dealt with that before?

I’d worked with the John Wells team before, and they’re just the classiest group of people and producers, so I knew I was in good hands. I think what I needed, in order to feel really comfortable, was just to have a conversation with the director and map out what I liked, what I didn’t like, and have them work around that in a way. I never felt that I wouldn’t do nudity in my career, I just didn’t think I’d do it at this age, after two kids. The truth is, is that I don’t have any problems with the human body and things with relationships and sex is a part of life, so I was really open to that. No matter what hang-ups you might have about your body or you how you look, all that is really thrown out the window once you dive into the scene, and in order to make it organic you have to let everything else go. You just do. 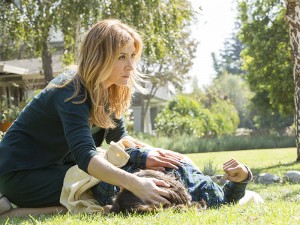 “Working on Shameless has opened me up to a part of my taste and sensibility that I haven’t had the opportunity to really tap into for a long time,” says Alexander, pictured on set as Helene Runyon.

What was the dynamic like with Jeremy Allen White as your younger lover Lip Gallagher?

Jeremy is such a talented actor, a wonderful person and very kind. We didn’t really have much warmup. It was literally like 7am and we were shooting one of the first scenes where he comes to Helene’s office and they end up getting it on. It was the first time that they kissed, so it was the first time we kissed, and you know it was really choreography. You kind of have to go for it and sort of see where it lands, but initially I was surprised that we were comfortable and clicked immediately, which isn’t always the case. Sometimes you’re having to just kind of get used to the person’s rhythm in a way, but you know Jeremy has been doing, many years of this. He’s been put into some pretty wild situations on that show, so he’s kind of a pro. I was looking to him like, “Are we good? Is everything okay?” One day Emmy (Rossum) gave me a nice little love lesson about a scene that we had to do, which was kind of an impromptu scene that they added and I was just a little nervous. She said, “Okay. What is it? What do you need to do? I’ve done it all.”

How does it play out with Helene’s husband?

It gets a bit strange. I didn’t know where they were going and so we went with the flow. I had a wonderful actor, Michael Reilly Burke, who plays my husband, and he is just so on the money. That could have been a role that was kind of creepy and weird and it’s not. I feel like he’s rather funny, and his exchanges with Lip are just really ‘off’, so it’ll be curious to see what happens between them. I don’t quite know. My personal feeling on open marriage is I don’t particularly understand, only because I’m a very sensitive and emotional person, and I would want that one-on-one, but it’s interesting to watch, and it was interesting as an actor to explore what that would feel like. Helene is fully exposed, in bed, with another man, and she doesn’t even blink. Her husband walks in and she kisses him as if no one was in the room, and that’s crazy. A few scenes were cut out of the last episode for timing reasons, which were really more about the husband becoming a bit more aware that this was getting more complicated, and he and Lip get into a bit because Lip starts to break some boundaries, but it was interesting to see that because I felt like Helene was in the middle, and where would she go. How would she deal with this now? She created the problem.

Season six is in the works – You’ll be back? Any idea what’s coming up for Helene?

I believe so, yes. But I have no idea whatsoever what’s going to happen.

What would be an ideal role for you now?

This job, working on Shameless, has opened me up to a part of my taste and sensibility that I haven’t had the opportunity to really tap into for a long time. We go where our work is and we go where we’re wanted, and what I really love is to be able to act and have the boundaries open up a bit so that you can play more and explore more. In television unfortunately it’s sometimes like making sausage, like, “don’t change the flavor, or the brand, every week,” and for an actor that can get a little tedious because there is a way great writers can grow those characters and still make them interesting for the audience and the actor. I would love to produce and star on a show. I came out of film school producing, I’ve been developing things and now I think it’s time for me to do that. I’ve gained a lot of experience in television, so that’s my next step.