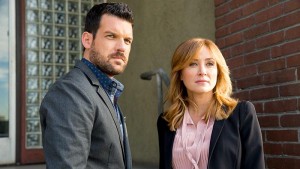 Rizzoli & Isles is back for more this month, and with a new season usually comes something new, which could be the introduction of a new character or two. In fact, the latest news out about the TNT drama is about the casting of two characters, both with some type of connection to Maura Isles (Sasha Alexander) – and when to expect each to show up this summer. One of them will be in the premiere and the other will show up a bit later in the season.

As the Inquisitr previously reported, there will be 18 episodes in Rizzoli & Isles Season 6. It all begins on Tuesday, June 16. (While the show has previously been paired with Perception, with that series cancelled, it will now be airing with the new TNT series Proof.) In fact, it’s the premiere that will introduce one of the new characters, Kent Drake, played by Adam Sinclair. He’ll be working with Maura in the medical examiner’s office, and while you’ll know more about him by the time the premiere is over, there will be reason to wonder about who he is.

“Kent, a military school grad who trained in Glasgow and did a tour in Afghanistan, make quite an, um, interesting first impression on Maura,” TV Guide reveals, as “she walks in on him having already set up shop, wearing a loud floral shirt and… FiveFingers running shoes.”

Furthermore, while Jane (Angie Harmon) makes a joke about his name and superheroes, there’s the possibility that what they don’t know about him is on the other end of the hero/villain scale.

In other Rizzoli & Isles Season 6 news, the Hollywood Reporter has revealed that Maura’s adoptive father, Arthur, played by M*A*S*H’s David Ogden Stiers, will be introduced in Episode 8, with showrunner Jan Nash explaining that it’s time after the series has already introduced her biological father (Paddy Doyle, played by John Doman) and mother (Hope Martin, played by Sharon Lawrence) and adoptive mother (Constance, played by Jacqueline Bisset).

“We spent a lot of time talking about who that person is. We’ve seen all of the rest of the characters, why have we not seen that one? It gave us a really interesting opportunity to bring some conflict into the show for the Maura Isles character.”