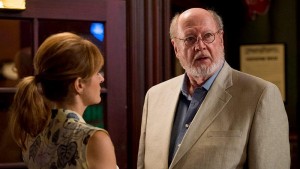 M*A*S*H vet David Ogden Stiers has been cast as her adoptive father, Arthur, The Hollywood Reporter has learned.

“We spent a lot of time talking about who that person is,” showrunner Jan Nash told THR. “We’ve seen all of the rest of the characters, why have we not seen that one? It gave us a really interesting opportunity to bring some conflict into the show for the Maura Isles character.”

Stiers will make his debut in the eighth episode of the upcoming sixth season.

Rizzoli & Isles‘ new season kicks off Tuesday, June 16 at 9 p.m. on TNT. Are you excited to meet Arthur Isles?