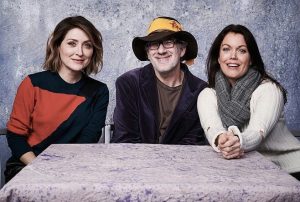 Based on characters originated in Feiffer’s comic strip, the comedy is about two old friends who reconnect after 30 years apart. Theme is a timely story of two men behaving badly, and the strong women who rein them in. Feiffer is the Pulitzer Prize-winning syndicated cartoonist, author and satirist who scripted Carnal Knowledge and other pics.

“I was 27 when I thought up the character ‘Bernard’ for my new Village Voice cartoon, Feiffer said. “I was 28 when I met the prototype for ‘Huey’ at a Village party, and added him to the cast of the strip. Who would have thought Bernard, Huey, and I would last this long? I want to thank Dan for bringing about this funny and thoughtful generational-splicing geriatric reunion. The dance goes on.”