Jim Rash and David Koechner play the title roles in Dan Mirvish’s dark comedy based on a decades-old, unproduced script by Jules Feiffer. 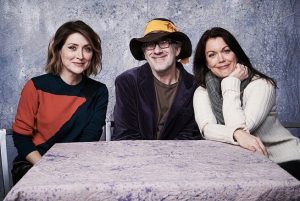 The backstory of Dan Mirvish’s indie dramedy is nearly more interesting than the film itself. Years ago, the co-founder of the Slamdance Film Festival read about an unproduced screenplay written by Jules Feiffer decades earlier. Mirvish contacted the legendary cartoonist/writer, but Feiffer was unable to locate the script. After much sleuthing, a copy was eventually located, followed by the original handwritten draft that was found in Feiffer’s archives at the Library of Congress. The resulting film, Bernard and Huey, serves as this year’s closing night film at Slamdance. It is based on characters created by Feiffer way back in 1957 and showcased in comic strips that ran for years in Playboy and The Village Voice.

Feiffer’s writing is instantly identifiable in this film bearing no small resemblance to the 1971 classic Carnal Knowledge, scripted by Feiffer and directed by Mike Nichols. The opening scene, set in the 1980s, shows the titular, then-college age characters engaged in a frank and misogynistic conversation about women, with a rakish young Huey (Jake O’Connor) attempting to help his sex-challenged friend Bernard (Jay Renshaw) by offering suggestions for possible dates culled from his heavily annotated, not-so-little black book.

Cut to 25 years later, when the tables have turned. Bernard (Jim Rash, Community) is now a book editor living in Manhattan whose apartment has a virtual revolving door for his numerous sexual conquests, including his shrink girlfriend Roz (Sasha Alexander). Huey (David Koechner), who one day shows up at Bernard’s door unexpectedly, has become an overweight sad sack, estranged from both his ex-wife and twenty-something daughter Zelda (Mae Whitman) and in desperate need of a place to stay.

After their reunion, the two old friends find their fortunes reversing once again. Bernard begins a relationship with aspiring cartoonist Zelda after she comes on to him, but the high-flying bachelor more than meets his match in the free-spirited, much younger woman. He sadly reappraises his life choices even as Huey regains his confidence thanks to his positive interactions with several women, including Bernard’s co-worker Mona (Nancy Travis).

Bernard and Huey lacks the sharpness of Feiffer’s best work, which may be why it wasn’t produced in the first place. The screenplay rambles at times, with too many scenes meandering aimlessly with little impact. But it does present an incisive portrait of middle-aged men refusing to grow up, especially as contrasted with the many smart women in their orbit who have no hesitation about putting them in their place.

Rash is a bit hard to swallow as a highly successful lady-killer, but he does an excellent job of conveying Bernard’s self-absorption and oddball charm. The ever-reliable Koechner admirably underplays Huey’s loser aspects, thankfully resisting the opportunity to turn him into a caricature. But it’s the female performers who steal the show, especially Whitman as the uber-confident Zelda and Alexander as the girlfriend who tolerates Bernard’s immaturity even while calling him out for it.

Clearly shot on a low budget — in the press notes, the director describes how he shot a scene set in the New York City subway in his garage, with the actors bouncing around while clutching a pole — Bernard and Huey represents little more than a footnote to Feiffer’s screenwriting career. But it effectively demonstrates that his footnotes are better than many writers’ best efforts.